The equipment makes all the difference when there's a bonus at stake. 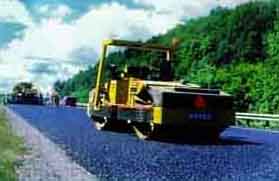 When there's a bonus at stake, you want to do everything right. You want to make sure all the bases are covered, and that the crew works as a real team. One of the biggest factors in your success can be the equipment you choose to work with. Here is a case history of a project in which the choice of equipment was so critical it made the difference not only in whether the bonus was even paid, but how big the bonus turned out to be.

This project, a 100,000 ton (90,000 metric ton) highway project on Route 91 in St. Johnsbury, VT. required some deep discussions about the selection of equipment for the project. I worked within the parameters the contractor, Brox Industries, Dracut, Mass., set. We selected a 1055B CAT paver, which is the Multi-Track paver, a continuous rubber band model. It was equipped with a 1020 B screed, which is 10 feet wide and goes out to 20 feet.

For the automation, we opted not to go with the contact grade and slope sensor. Instead, we worked with the Topcon laser system, because we thought it would be more versatile for our needs on the job, and because we were able to go inside the system and customize its settings for our needs. We were able to control the electrical impulses to the tow point cylinder and match it to our needs.

We elected to go with a Blaw-Knox 30 foot ski. We opted not to go with a stringed model because we weren't sure about the affect the humidity in the Vermont area would have on the equipment. We used the ski as a reference on all lifts, including matching the joint.

There were two areas of performance for which the contractor could receive bonuses. One was the compaction results of the first and second lifts, and the other was based on a vehicle ride test. First to be determined were compaction results.

The contract's specifications defined the average acceptable pavement density to range from 92 to 96 percent. Values above 98 or below 90 percent would mandate the pavement be removed and new material laid. The acceptable bid-price densities were 92 to 92.9 percent and 95.1 to 96 percent. To receive the bonus the pavement's density had to be consistently between 93 and 95 percent.

The bonus equaled 1 percent of the laid-paving contract price corresponding to one of the two lifts. A bonus was available for each lift, independent of the other. The pavement was tested daily for density to determine if a bonus would be awarded for the day's paving work.

We were able to have consistency in compaction because the paver was consistent in speed with the Blaw-Knox MC30 material transfer vehicle, which fed the paver at a given rate. Because of the consistent pace, we were able to pave at 32 feet per minute, and that was a secret element to our success. That synchronization gave us a consistent mix temperature and a uniform mat.

The lead roller's performance was critical in getting the high-quality compaction needed for bonus payments. We selected the rollers that could take the guesswork out of compacting. We started with a 78 inch drum as the lead roller because we only had to make two passes up and back, instead of the typical three. On a 12-foot road with a 66 foot roller, we would have had to make three passes. 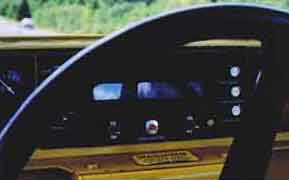 The model we selected was a Hypac C778B double-drum vibratory compactor, manufactured by Compaction America Inc., Kewanee, Ill. It has two 78 inch wide by 48 inch diameter drums. We elected to use the 78 inch drum for initial breakdown for this reason: We could control the amplitude and frequencies at the operator's console. The roller operator never had to get off the machine and back on again to make adjustments.

On this model, everything is what I call "Dial-o-matic." There are two knobs on the console - one for the front drum and one for the back drum. We dial up amplitude and frequency so we can have balanced drums, and we get a digital readout which measures amplitude, frequency, miles per hour and the impactment spaces.

Operating the roller at 2 mph, the amplitude was set on low and the frequency of both DRUMs was set at 3,000 vpm. For making the first pass behind the paver, this was a suitable vibratory setting and travel speed. It compacted the asphalt over the existing milled base with a good, even density.

However, it did not fill all the longitudinal grooves created in the base by the milling machine. Voids, if left, reduce the bonding integrity between the new pavement and the existing pavement. The milled surface grooves were filled with asphalt using a Bros rubber multi-tired compactor that followed the Hypac.

The air pressure in the rubber tires was regulated according to the temperature of the mat. The hotter the mat, the lower the tires' air pressure. Typically, the temperature ranged from 180° F to 140° F by the time the Bros was used as a secondary roller.

Lower air pressure causes a tire to squat, giving it a larger footprint on the paving surface. In turn, the larger the footprint, the less roller-weight there is per square inch (psi) on the paving material. If the tires have too much air pressure, the greater psi causes the hot pavement to be squeezed laterally. In reverse, if the psi applied from the tires is too low, the asphalt will not be forced into the grooves.

The third roller used was a Dresser 66 inch wide, 12 ton static roller. This roller was used for polishing the first lift. It was actually a vibratory roller we used in the static mode. By this time, surface temperatures of the pavement were between 130° and 110° F.

The 78 inch Hypac also was used as the first roller for the second lift. Frequency was reduced to 2,700 vpm and the amplitude set on low. A Hypac 350D with a 54 inch wide roller was the second compactor and was followed by the Dresser roller again. Two tons of optional weight were removed for a gross weight of 8 tons. An 8 ton Hypac compactor was just right for preventing the soft paving material from squeezing laterally. Because there was a tender zone we opted not to use the extra two tons of weight.

After we used the 66 inch Dresser roller we opted not to use the pneumatic tired roller because we have a nice, smooth surface already. Plus, we knew our asphalt was bonding uniformly both longitudinally and transversely. Both Hypac compactors were used for rolling out the wearing course. The vibratory systems were turned off during this process.

The compaction results were phenomenal. The density was held within the 93 to 95 percent range for the whole project. The contractor received a bonus for every ton of asphalt laid on the first and second lift.

A TopCon laser system, used for precisely controlling the thickness of pavement placed by the paver, was instrumental as well in achieving the vehicle ride test results. Basically, the purpose of this test was to ensure a smooth ride for the vehicles using the highway.

Testing was conducted on the pavement finish with a trailer-mounted Rainhart-Mays ride meter, which continually records the highway's roughness as the trailer is pulled behind the van driven at highway speeds up to 65 miles (105 kilometers) per hour. The Mays meter has to ride at the prevailing posted speed limit. We had a police escort in front and in back of us so we could obtain the measurements. We started out at 6 a.m. and had to ride each lane three times so the average of the three passes could be taken.

Then we traveled down the regular lane and took measurements of that. The meter's readout is defined in IRI numeric values. An acceptably smooth ride by the AOT was defined in the contract as an IRI value of 60 to 69.

Any IRI value recorded lower than 60 when testing means the ride is even smoother. Conversely, as the IRI numeric value gradually increases, the rougher the ride. The test results for Brox' paved highway section was an IRI of 44. This put the size of the bonus at 10 percent of the cost of the OGFC.

Notably, this was the smoothest highway records in Vermont since the AOT first implemented the ride test. We rode each lift, so we knew we were there on the second lift. And, wherever we found it was rough, we marked the highway with marking paint so we could fine tune the paving a little better on the next lift. The road looked like a checkerboard when it came time to pave the next lift.

Credit should go to the equipment used, including the MC30 MTV, the CAT paver, the three rollers we used, and all the high-tech microprocessors and automation that went into the equipment. But credit should go first to the people involved in this project. You can put all the microprocessors you want on your equipment, but if your people don't understand the technology, you have paid too much for it.

When we milled out the job, we videotaped the subcontractors work to see how they milled the pavement and to make sure they used straight edges and correct automation. We questioned every stage to make sure they were within the right parameters.

When the paving crew got together, it was a mix of talent that truly had not worked together before. What Brox did was take the best of the best to go up to Vermont to make a commitment to that job. The best people from each paving crew went into the one that worked in St. Johnsbury.

We met up there and talked every morning about how we were going to pave the job, whether it would be from bridge deck to bridge deck, or whether we would pave a joint through it. We set up the paving speed and videotaped the action every day. We all stayed in the same hotel, and each evening when there wasn't anything else to do, we watched the videotape of how we all performed the work and critiqued ourselves.

After each lift, the crew members were pumped up about the next course and when we got to the open graded friction surface course, you wouldn't believe the excitement in the people. You could feel the realization that this work was coming out great. That takes a certain kind of commitment from a crew.

When we started out paving, we experienced centerline segregation that we could not get out of the mat, even with a brand new paver. The mechanic had to rectify the situation, and truly performed magic so we could move the material in a mass.

And the crew, realizing how critical the work was to achieving bonus, all helped one another, sort of like cross-training on the job. The guy on the back end of the paver ran the MTV for about an hour or so to give the MTV operator a break. The paver operator jumped down and ran the back end while his partner took the MTV controls.

Granted, we could do that because there weren't many variables on the pavement, but we also had highly trained, motivated people and the whole success of the job, including the bonuses, all ties back to their performance.

When we rode the last lift on the OGFC, and I got home after the project was done, the results of the rideabililty job were waiting for me on the fax machine. I was ecstatic because the job prior to this one had only received a 58 IRI. To have an out-of-state company go into another state and perform the way they did is extraordinary. They did what they had to do. Their motto should be, "whatever it takes."

Write to us at our E-mail address for more information